Sometimes we all need a little perspective. We see something one way until someone comes along and smacks us in the head and says “hey, come stand over here and look at it dummy!” Even when we think we’ve looked at it from all angles, there’s usually someone else that can point out what you’re doing wrong and why you can’t see the forest for the trees. 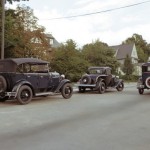 I saw a post on another site, it was about a bunch of pictures of old cars, you can see one of the old shots here on the left. I love old cars of all kinds. I really prefer the 60’s muscle cars, my first car was a ’68 Mustang, but I appreciate them all. I’ve also pretty much been a Ford guy my whole life, but seeing the old cars of all makes and models, even foreign brands, just stops me and makes me think about days past. The old cars had style, they were designed without computers and built without robots. Some human had contact with those old cars all the way from the idea, to the pencil on the paper, to bolting parts on it, it was true craftsmanship. Modern cars are great too. They get mileage that would put the old ones to shame, and we won’t even talk about the creature comforts. Can you imagine living in a time when air conditioning was an option, or not even available from the factory, so the dealers installed aftermarket ones? But seeing these old pics  just stops me for a moment and lets me daydream of the “good old days” when things were simpler, but still looked great. Open it up and check it out.

However, what you’re seeing here is really just some recent creative camera work, and likely a little fancy editing, by photographer Michael Paul Smith. Die cast cars and a cheap camera, all shot outside with real life as the background, give his fictional town an old but realistic look from yesteryear. He says the cheap camera works best because the newer models look too good, he prefers a cheap one to hide the details you don’t need to see. In reality all he’s doing is taking pictures of toy cars outside on a table, but with a little perspective, you’re seeing the outside of Beaver Cleaver’s house or an old woody station wagon headed to a drive in.  You can see more of Michael’s work at Visualnews or head straight to his Flickr stream for some really cool pics and the behind the scenes setup of his shots. 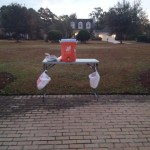 Saturday I went for my first run since my bombed marathon a week ago. It was “just” a 4 miler and I intended to take it easy, not even worry about the time. Get outside and burn some calories, not even look at the GPS. That’s a good thing because it was a slow run. About a mile in my hip flexors starting hurting and I felt like my heart rate was too high. I checked it on my Garmin and it really wasn’t “high,” though it could have been lower for the speed I was running. I just assumed I wasn’t fully recovered from the hard 26.2 I did last week. I even considered taking another week off. A local friend Dan, that organizes several ultra races, had scheduled an informal group run on Sunday though, about 12 miles or so, but really loose on distance, and there are usually all speeds at these. He does a good job with these informal runs, bringing a big water cooler and setting it up half way through the run, on a table with trash baggies, and usually something to eat, he’s an awesome guy and does this because he like to run with others. There was no signup or credit cards involved here either, just an invite sent on Facebook, “Come Run With Us.”

I had clicked the “Maybe” button when I got the invite a week ago, but after Saturday’s 4 miles I thought I’d be stupid to go. Then I got up Sunday morning and sat on the couch with my oatmeal for a bit, doing a little reading, when I got to thinking. I could sit here and be lazy all day “recovering,” or I could go get some miles under the run belt, and do it with others, something I don’t get to do often when training, I run alone a lot. I grabbed all my gear and headed out, texting him saying “I’m on my way, don’t leave without me!” I had a GREAT time! My hip flexors were still sore, but running with others helped pass the miles and take my mind off the pain. I got to talk about what went wrong and where my head was, with ultra runner bad asses that were doing 100 mile races 2 weeks ago, making my measly marathon seem like a walk to the mailbox. We spent a lot of time talking about food and exchanging recipes. I’m still unsure of what happened last week, and at this point I don’t even think I care, but spending some time with others, that have done far more than me running wise, gave me a new perspective. Now I just need to overcome my Resistance and suck it up.

At least I’m back to thinking about racing and training again. I’ll hopefully draw on this over the next week and do some more easy runs and get back in the frame of mind I should be in with less than 2 months before my next race.

Have you ever lost sight of what really mattered and needed help getting refocused? I sometimes spend too much focused on a tiny detail, when I need to step back across the street and look at the whole picture. Maybe you’re good at seeing things from that different perspective, I could use you as a friend! Let me know how it’s affected you by commenting below, and please share with your friends, maybe they need some too, or maybe they can help me.

One thought on “What You See is NOT What You Get”