I got to spend this past weekend in the happiest place on earth, Disney World, my home away from home. It’s only a 4 hr drive from my “real” home, so we have annual passes and go 5+ times each year. I’m also fortunate to have a job that I not only have plenty of vacation time to be able to take off on a Friday, which is what I did this time, but since I can work most anywhere I have an internet connection, I’ve even taken “working” vacations where I work from the room while the family enjoys the pool, parks, or shopping, until I get off and we go spend the rest of the night riding rides and eating great food. It’s been a pretty awesome gig over the years, and who isn’t thankful for a job these days? 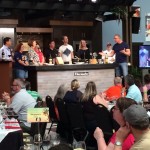 In October and early November, at EPCOT, they host the International Food and Wine Festival every year. Nearly 30 countries are represented by booths with samples of food, wine, and/or beer from each country. They also have celebrities, usually food related such as Food Network stars, or popular Disney chefs from their resort restaurants, as well as paid seminars, demonstrations, and parties. I got to see chef Robert Irvine’s Kitchen Memories seminar, and even got brought on stage with him for a few minutes, wish I had a picture of that! One of the highlights is the Eat to the Beat concert series where they host bands every night, usually from a few decades past. I’ve seen Night Ranger, the Go Gos, Taylor Dayne, Sister Hazel, Christopher Cross, Boyz to Men, and they’ve had many other artists from the 60s through the 80s.

This year there was a new addition, The Spin Doctors, which is actually one of the newer bands I’ve seen, they had several big songs in the early to mid 90s, including Pocket Full of Kryptonite, Little Miss Can’t Be Wrong, and their biggest hit, Two Princes, and have a new album out now, If The River Was Whiskey

. We got to see all three sets, which they mix in several of their new songs, except they have to play their big hits every time, and always closed with Two Princes. Before playing it though, the lead singer Chris Barron, introduced it in a way that struck me “just right,” because it seems to be a recurring theme lately;

“Here’s a song we wrote because it was our job, and now we probably never have to do another job we hate again.”

Wow! How would you like to be able to do a job in your mid 20’s and live off it the rest of your life, or at least be able to do awesome jobs that didn’t suck, forever?! Now don’t get me wrong, bands have a tough life, and I don’t ever recall the Spin Doctors playing sold out stadiums with the Stones opening for them. They likely spent many years in dingy clubs trying to get bar owners to give them a chance, playing for free or even paying to pay. But it’s amazing how some people are able to take a passion and be able to make a living off of it, while others grudgingly head off to the salt mines every day, cursing their pharaoh. These guys suffered for their passion, and it worked out for them, so now they get live the rest of their life doing their passion, instead of a job they all hate. I’m also always amazed when someone like them, that you haven’t really heard of in a while so you assume they slipped off the face of the earth and had to get “real” jobs, but apparently lived wisely since, and didn’t blow their wad. Check out my footage below;

I’ll share another related story that happened recently at dinner with some friends of ours, and we were talking, batting things around, when I asked the wife “what would you do if you were told you had one year to live? Would you change anything and do things different? Would you find your passion?” She paused for a moment, and then looking straight across the table at me, teared up. I was thinking “Oh no! What have I done?! Can I stick those words back in my mouth?” After a bit, never looking away, she said she would quit her job and serve people. I asked what she meant by serve people, like feed the hungry, soup kitchens? She said yes. She looked over at her husband and he said “well why don’t you quit and do that right now?” She said there was no way, she had to work. It came up briefly the next morning at breakfast and she said she wanted to make sure we understood she didn’t hate her job, I knew what she meant though, I have a lot of respect for her saying that. I did mention she could serve people maybe on weekends a few times each month, you never know where a spark will come from.

Are you “stuck” in a job you hate but don’t know what your passion is? Better yet, have you figured out your passion and left that job you hated to follow a dream and made it work? Let me know in the comments below and please share with your followers online as well, there are several sharing options below to choose from.

3 thoughts on “Never Work Another Job you Hate, Ever Again”