Sounds like one of those “Get Rich Quick” schemes where you might have to actually PAY money to be part of some special program or maybe have some invasive box in your house that the NSA is watching. However, I’m not here trying to sell you something, I will make nothing from sharing this with you other than the enjoyment of letting you know about a little program you can use, and it’s real, I do it myself. It’s an app for your phone called Viggle, and you will literally get paid to do something you probably do everyday for too long, watch TV, you don’t even have to keep watching, and as you’ll learn in a moment, you don’t technically have to be in front of your TV at all.

Download the app on your smartphone or tablet, its available for free on both iOS and Android in their respective stores so just go search for “Viggle”, and create an account. If you’re afraid of using your “good” email account, use your “throwdown” Gmail, Yahoo, Hotmail, AOL (YIKES) or whatever you use to sign up for “questionable” accounts with, but just know that I’ve been a member and used my real account and they don’t spam you. 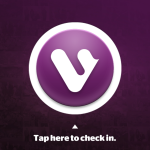 The basis is that you “check in” to a show or movie on TV and earn 1 point per minute. When you open the app you’ll see a screen like the one here, just tap the “V,” and it’ll say that it is “Listening to your TV” while big bars move up and down with the sounds, then it will say “Matching” as it’s searching for what show it just heared. Obviously you will have a harder time if you’re in a noisy place like a sports bar or your kids are running around screaming. If it doesn’t pick it up or match then it’ll give you two more opportunities to listen again. This next part is key, if it failed to hear or match the show you were watching, you’ll have the opportunity to search by typing in the name and then selecting the show when it pops up, it’s just that simple. You’ll want to check in to the show right after it starts so you get as many points as possible. What you may have just picked up on is that you can be sitting in your office at work or riding the train without a tv anywhere close by, try to check in 3 times which obviously won’t work, and then search for a show manually and check in, is this something you could do from work, even if you had to do it from the bathroom on break? Viggle doesn’t know where you are and that there is no TV around, you might really be in a crowded sports bar trying to check in to the game. Maybe pick a movie that you saw would be on during the day so it stays checked in for 2-3 hours, or a sporting event. I know this is not the intention Viggle had but it works that way and I’m sure they are aware of it. That’s it, check in and set the phone down, you’re earning points. It can even check in pretty well during commercials.

Next, there are sometimes videos that you can watch, you aren’t forced to, it’s a choice, but you can earn between 5-100 points for them depending on whatever promos Viggle has running at the time. Start one and set the phone down, they’re always short, 10-30 seconds, and you just earned more points than you can watching a show, and it can even happen while you’re watching a show so you’re kind of double dipping.

Also, there are usually bonus shows to check in to, usually during prime time hours each night but sometimes during the day in certain situations like during the Olympics or Sunday football, where they offer +50-100 bonus points for checking in to certain shows. You’ll see them in a slider that you can scroll through and even set reminders so you don’t forget to check in during that time. I’ll mention that you can only earn points for being checked in to 12 hours worth of shows each day, so don’t start checking in to the morning show at 7:00AM and then not be able to check in to shows in the evening when you could be getting bonus points on top of the check in minutes. You have to stay checked in to a bonus point show for at least 10 minutes to get the bonus, so if there are several at 8:00 tonight, you can check in to the first at 8:00, another at 8:10, another at 8:20, and so on. Be sure to check in to the 30 minute shows first because you can check in to the hour long ones later, if it’s past 8:20 and the show is only 30 minutes long, you’re too late. You’ll still get a point for the minutes but no bonus, same after 8:50 if it’s an hour show. If it’s something longer like Monday night football or a movie, wait until later because usually there are fewer 30 minute shows in the 9:00 and 10:00 hour so you don’t have to watch your time so much if you’re trying to maximize points.

Lastly, there are trivia questions for some shows and sporting events where you can actually take an active roll in earning points by answering trivia or selecting a team or player, My Guy, and when they do something good, score a touchdown, make a catch, interception, etc, you’ll get even more points, I think if you max out all 4 quarters of a football game during My Guy you can get 1,000 points, plus the check in bonus, plus a point per minute for watching. Trivia is usually 10-25 points per question, and 5 for getting it wrong even. 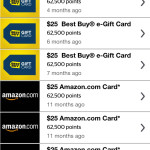 What can you do with all these points? Trade them in on something you want like “Deals” where you may get a percentage off something, there are several right now for 30% off glasses at different optical places, Universal Studios discounted tickets, or Fandango gift cards. There are big items like cruises, car rentals, hotel stays, or Kindles. I personally love the gift cards though, and there are usually several that are worthy of redeeming points for like iTunes, Starbucks, Chilli’s, Lowes, or GAP, but my favorites are Best Buy and the hard one, Amazon.com, which they only carry occasionally. Click that image to the left and you’ll see my rewards history. Am I getting rich and quitting my job doing this? No, but did I make $250 watching tv or maybe not even being near a tv just by checking in to a show and then setting my phone down, absolutely!

The downsides, well the 12 hour limit is a bummer, it wasn’t there in the beginning but I’m sure people were staying checked in nearly 24 hours a day so they changed that rule this year, so you sometimes need to be aware and not check in to things all day and miss nightly bonuses if you care about them. It can sometimes be frustrating to check in to some shows when it fails 3 times and you’re in a perfectly quiet room, then when you search you can’t find the show, this happens a lot if it’s on AMC network for some reason, they just don’t show up in the database, as well as some smaller networks. It also doesn’t work with local shows like news or a locally produced show, though it has on a few occasions worked with my local morning news. I mentioned above that it can sometimes work even during commercials but it has to be a national commercial, not one for your local bank or car dealership. You can even check in to a show that you dvr/Tivo’d but it has to have been on the air in the last 2 weeks, no checking in to the Super Bowl all summer you recorded. There’s also a 6,000 point/day limit, which I’ve NEVER come close to hitting even if I were doing My Guy sports, trivia, and maxing out my 12 hours, so I don’t really care about that one.

That’s it, it really is simple, just sign up and check in to something and start earning. You can be as easy as you like and just check in occasionally, the points will come, or you can go rabid and try to max out points every day. You can see my statement above where there were periods I didn’t do it as much, and others where I was getting $25 certificates every other month or so. Oh yeah, get your spouse to do it as well, my wife and I do it together and she’s earned more than I so double what you see. I used the Best Buy certificates, as well as some others I may do another post on later, to pay half of the price of a brand new MacBook Air that I’m writing on now, that was over $600 between the two, so my computer wasn’t completely “free,” but you can definitely find laptops for less than that. The certificates don’t expire either, we started saving last Christmas and I bought the computer in June when the new ones came out. Next we’re saving for a new tv, ours is getting old and blue pixels are starting to appear scattered all over so we’re hoping it doesn’t die before we rack up some more points to help out in it’s replacement.

Do you have any questions or have you been a Viggler for a while and racked up a bunch of points, let me know below, and be sure to share with your friends that might need a new tv too, just click any of the pretty social media buttons below and share on your favorite network.