I’m standing in the corral before the biggest race of the year in my home town, the Rock n Roll Marathon, huddled among 20,000 other people wearing breathable, plastic clothing, trying to stay warm. With about 5 minutes to go before the start, someone comes on a PA system that’s been pumping music out for a while, and makes some announcements we can barely hear, it probably sounds better up front where the fast runners are. Then it gets quiet and I make out someone singing the national anthem. People stand up and shuffle around, not all know what to do. Some keep talking, some stand at attention, some put their hand over their heart, and some salute. Then it’s over and everyone cheers. Then more chatter on the PA, some clapping from people up front that can actually see the stage beside the start line, and then they all start yelling and cheering, I have no clue what’s going on but I thought I could make out something about “DC,” they must be talking about our wonderful politicians doing such a fine job. A guitar starts playing and a big sign starts flashing over the START line. Everyone is looking around, like when you know something is happening but it hasn’t registered just what that is. Then a familiar voice blasts out “Stand up and be counted, for what you are about to receive…” It hits everyone at once, “That’s AC/DC!” The sign over the start is now scrolling words;

I think it hadn’t hit everyone yet, but I knew exactly what that meant. AC/DC is jamming at the start line of the marathon and about to send us off with a bang! When it gets to the chorus of the song, lead singer Brian Johnson changed it up to “For those about to RUNNNN! We salute you!!!” The song kept playing on “We RUN at dawn on the front line. Like a bolt right out of the blue…” The sign is flashing again;

Everyone is up bouncing from the rock energy, and trying to stay warm while dressed in skimpy run gear that is meant to keep us cool while running, not warm while standing in the pre-dawn hours in the Fall. Then it comes, “We’re just a battery for hire with a guitar fire, ready and aimed at you. Pick up your balls and load up your cannon, for a twenty-one gun salute!” Everyone is electric, hair is standing on end, goosebumps on top of goosebumps. “For those about to RUN – FIRE!” BOOM!!!! Fireworks blast off at the start line and runners take off. “We salute you!! For those about to RUN!!!” BOOM!! More fireworks blast off and they’re getting further down the course. The band is still playing, fireworks are still going off every time a new corral comes up and sends them off on the course. None of us runners can believe it, we were just launched by AC/DC to go run a marathon with fireworks blasting sequentially, all the way down the 1+ mile straightway every time a cannon fires during the song, how freaking awesome was that?!?!

Then the song ends and I hear Michael Jackson in my ear buds, I look around, “yep, still in my neighborhood.”  None of this really happened, because as I write this it’s still almost 2 weeks away from the Rock n Roll Marathon 2013 in Savannah. I’m on one of my last long training runs and all alone on a Sunday evening, I haven’t even had a car pass me, much less seen another runner since I left home. When I look down my heart rate monitor is pegged though, and I still have several more miles to go before I can head home and I didn’t bring any water, I’m also running WAY too fast for the amount of miles I need to go to get home, I can’t hold this pace that long.

What can visualization do for you? It can make you a rock star. Every time “For Those About to Rock” comes on my Pandora station, this is the mental image I have in my mind, for YEARS now. Sometimes I even close my eyes while running, only in safe, straight places obviously, but I’ve played this scenario out over and over, every time it comes on my run channel I created on Pandora. I get the goosebumps, for real, I can see the fireworks going off on the road sides, and every time I end up running faster, what a rush. Don’t believe me? Here’s a tweet I sent two years ago today before my very first marathon, this very same one in Savannah, check the date on the tweet;

Id donate $1k if @RunRocknRoll would get AC/DC to play a 1hr ver of 'For those about to Run, we salute you!' & fire canons to start ea wave

That’s how visualization works, just like playing cowboys and Indians as a kid seemed real, except in your mind, and it works. I’ve read about visualization for years in regards to many topics, lifting a weight heavier than you’ve ever lifted, asking the boss for a raise, getting married, really anything that may seem hard and needing extra motivation, you can try to paint yourself a picture of how you see it happening, the best and most optimal way for you, because you may be your only motivator, or maybe you’re embarrassed to tell someone about a fear or that you need help. I’ve spent a lot of time in my life alone. I was an only child and shy, and it always worked out where most of the neighborhood kids were a lot older or younger than me, I was always in between. Heck this is true even today, I have a lot of friends younger and older than I am, but very few my age. Even when I’m running these races I’m in between my “fast” friends who get to start in a corral up front and I can never catch them, but I’m faster than the rest of my friends that have to start behind me and can’t catch me. I spend the whole race in “no man’s land” from standing in a corral alone to running the entire race alone, after spending months of training alone. So self motivation is HUGE in my running world, and visualization has become another tool I use to keep from focusing on the bad things, like pain, hunger, having to pee but not wanting to waste time standing in line behind 10 women at a porta-potty on the side of the race while the clock is ticking.

If you read my Do You Set Goals post you saw where goal setting was something I always pictured Dudley Do-Rights doing, but I had learned through running that it worked, and I needed to try it in other parts of my life. Visualization is the same, you’re setting a goal and then visualizing yourself reaching that goal, and every step along the way. You not only say “I want to lose weight/run a marathon/ask someone to marry me” you see yourself doing it. I know plenty of places where I need to do this outside of running, I’m sure you can think of several things you’d like to do but need a little boost in getting there. If you don’t have the support you need, or at least don’t have it at important times like in the middle of a race, YOU may be your only butt kicker. Put yourself in your boss’ office, sitting in the chair, smelling the smells you remember from the last time you were in there, and asking for that raise. See yourself running down that finish line with the crowd cheering, cameras flashing off, knowing it’s all almost over and you’re ready for a bottle of water and to give your family a sweaty hug. 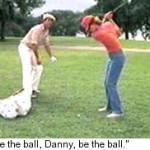 Remember the scene in Caddyshack where Chevy Chase’s character Ty Webb was encouraging Danny to “be the ball,” that’s visualization. He told Danny that there was a “force in the universe that makes things happen, and all you have to do is get in touch with it. Stop thinking, let things happen, and be the ball.” Then he puts on a blindfold and smacks a golf ball across a water hazard and right up on the green within feet of the cup, tapping distance. Of course being Caddyshack then Danny puts on the blindfold and proceeds to plunk his ball right into the water, he wasn’t being the ball, kids will never listen, many adults never learn either…

I’m still waiting on Competitor Group, the company who runs the Rock n Roll marathon series, to get back to me on bringing AC/DC to town, the $1000 offer still stands and I’d even help collect from others, I’m sure it would take more than a grand but I bet I could get more donations from others if it meant having AC/DC blast us off into the morning. Call me Competitor Group!

Have you ever used visualization to do something or motivate yourself to do something? Maybe you’re afraid to do something and would like to try this technique to help calm the nerves and “rehearse” how you want something to happen. Let me know in the comments below, and be sure to share this post on your favorite social channels by picking any, or all, of the buttons below and share with your friends and followers, you never know who you might help “be the ball!”