As a kid I couldn’t gain weight, I was a stick. I could eat a Whopper and fries, maybe some ice cream afterward, and not gain an ounce. Sadly that didn’t hold true after graduating college when PT at the NROTC unit and daily trips to the gym stopped, and a job sitting on my tail in an office with a break room full of junk food people brought in daily, in a part of town surrounded by fast food places started. I “don’t know how it happened,” but one day I woke up and there was a gut.

I didn’t really think about it much for many years, I wasn’t HUGE, just had a gut, I still had skinny legs and no butt. Then one day in 2004 it hit me in the shower, I think of things in the shower, I should have a way to record or document my shower ideas, more on that later. I was 34 and felt like I was 64. So I bought a bike, a nice once, like a Tour de France level, carbon fiber, racing bike. I rode it a lot, 20-50 miles/day even. I thought “man, I’m gonna start shedding the pounds soon.” I knew I didn’t put it on overnight so it wouldn’t come off over night. After a few years though, I had only lost a few pounds, and that was yo yo’ing between times of riding and not riding, usually in the winter when it was too cold to ride 20mph in cold air.

Then in Fall 2010 the Rock n Roll Marathon  series announced they were coming to Savannah in November 2011, and in Jan 2011 I decided I would cross an item off my bucket list and enter to run the full 26.2 miles. After seeing people on the Biggest Loser start at 400-500 lbs, and with only 6 months of training and weight loss, complete a marathon, surely I could do it with the little bit of weight I had and 10 months of training. I jumped online and quickly found a training plan that would take me from the 5k’s I’d done a few of, up to being ready for 26.2 miles. I again looked at my training plan and all the hundreds of miles I’d be running and thought “man, I’m gonna start shedding the pounds and be buff stuff by summer.” I did lose a few pounds but not very noticeable, though I did finish my first marathon in a respectable 4:29:32.

I kept running in 2012, though not as much as when training for the marathon, faked my way through a few half marathons, then ran two more full marathons in November 2012 and January 2013, at heavier weights than I did the first one and much slower. I may talk about this later because 2012 was a turning point in my running.

It’s a harsh realization when you learn that the number of calories you burn to run a full 26.2 mile marathon isn’t even enough to burn 1lb since you have to burn, or not eat, 3500 calories to lose 1lb. You burn roughly 100 calories, give or take, per mile, the more you weigh the more you burn/mile. You’d have to run about 35 miles in a week to burn a pound, and there were only a handful of weeks I went that far over the whole 10 months, no wonder people get discouraged when trying to lose weight or going to the gym. We’ve heard the 30 minutes/day, 3 times/week crap our whole lives, that’s not even hardly enough to sweat, much less lose weight. I knew that I needed to fix my diet, I couldn’t outrun a fork!

Then on Easter Sunday, March 31, 2013, a friend that body builds was telling me about a diary/logging app she used called MyFitnessPal where you could log your foods, scan barcodes to enter items, or choose from a vast library of food and restaurant items. You set it up for you, based on your size/weight and activity level. It gives you a target calorie goal for the day, which gets reduced every time you log something you ate, or goes up if you log an activity like a run. What an eye opener when you eat something and realize “CRAP! I’ve got to run to the front of the neighborhood and back just to burn that Coke?” So on April 1 I started logging everything that went in my mouth. WOW, what an eye opener THAT was! 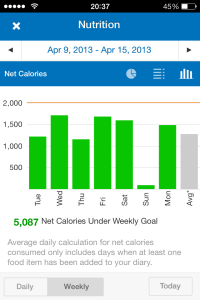 I didn’t really try to eat “right” or clean, I just kept at or below my calorie goal while eating the same foods I’d always eaten. I did ban pizza, it is my kryptonite, I can’t stop myself, I crave that acidy flavor of tomato sauce as a good, thin crust. It wasn’t allowed, nor was it even allowed to be mentioned as a possible dinner in our house or when driving around doing the “where do you wanna go? I don’t know, where do YOU want to go?” I did allow it to come back in June but it had to be made at home so we could control the ingredients, plus my wife can make a good red sauce so it satisfied that craving I had. I was never a big drinker but I stopped drinking all alcohol during this time because I didn’t want the useless calories. On days I ran I’d eat a little more since there was a bigger deficit. We stopped eating out a lot too, though that was as much in trying to save money as not eating calories, more here later. We didn’t cook anything special, I just didn’t finish it all up at the end of dinner, many times I’d save it for lunch the next day, but nothing really hard to do. There are typically only 2-3 days each week I don’t run so I try to be aware on those days that I won’t be burning any calories unless I cross train, and on Sundays I do my longest runs so I can usually eat what I want, notice how low Sunday is on the graph to the left here, I did a 20 mile run that day so it looks like I barely ate, the gray bar at the end shows my average that week, I probably wasn’t eating enough then. 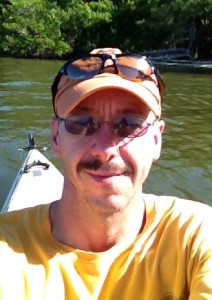 There were a few days that I was hungry, and there were days I’d go over by a hundred calories here or there, but I didn’t worry about it because the next day I’d go run and finish the day at a 300 calorie deficit. Overall each week I was in a deficit even below my goal of 1.5lbs/week loss and by July 1 I had lost 20lbs pretty easily. I was running throughout while training for a race in late June, but here it is over 3 more months past that and I’ve kept it off. I’ve raised my calorie goal to where I think is about a neutral balance, not gaining or losing. I’ve tweaked my macros, protein/carbohydrate/fat ratios, some in order to make sure I have enough carbs to fuel runs, and enough protein to retain muscle, and enough healthy fats but not too much so I can hopefully lose a tad more belly fat without losing muscle. For the first time in my life I can actually see lines that I think are abs. I wouldn’t call it a six pack, but there are definite lines there, I can see the shadow when the light is just right, or they are just really symmetrical fat rolls!

I’m not downing fitness, by any means, get out there and move doing whatever it is that motivates you, just don’t be discouraged when you don’t lose any weight because you walked two miles a few times each week or rode the bike around the neighborhood. I still run a LOT! I run more in one week than most of you exercise in a year most likely. You lose weight in the kitchen, you get fit in the gym/on the road. I’ll be doing my 4th marathon in a month, you guessed it, the Rock n Roll again, and I WILL be setting a PR, Personal Record this time. How can I not when I’m over 20lbs lighter!

Have you lost weight successfully or are you struggling to do so? Let me know your triumphs, struggles, and if I motivated you or you need motivation, leave me a comment, and be sure to share with your friends that may need some encouragement, just choose your favorite social media button below.

6 thoughts on “How I Lost 20lbs Without Really Trying”