With 24 hours to go, I’m well on my way to doing battle. I have a big race tomorrow, a full marathon which is 26.2 miles. I’ve done it before, 3 times actually. I’ve even run a few ultra-marathons, so I’ve been up to 31 miles in one of them. This one however will be different than all of the others, because I have a goal. 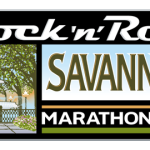 I did my first full marathon two years ago, the same race I’m running tomorrow, the Rock n Roll Savannah, it’s my home town race. I spent 10 months training for it. I went through the whole unknown part of training for a marathon, spent months wondering “can I make it 26.2 miles?” I did it. Then afterward something clicked and my brain said “meh, you did that, now what?” I slouched the next year, even though I’d signed up to run the same race, and a few others, trying to get a cheaper entry fee during early bird registration. But I didn’t train. My brain said “you did that already, what are you trying to do now?” It was a comfy 11 months getting fat.

I went out last year and suffered miserably. It was hotter than the year before, I’d done virtually no training, and I was scared because it hit me too late that I was totally unprepared. I probably should have just eaten the entry fee, I didn’t deserve to go out there with people that had put in their miles training. I certainly wasn’t going to come close to what I’d done the year before, there was no point other than to go suffer through it, and that I did. It took me 2 hours longer to finish my second one, in hotter weather, weighing more, it sucked bad.

I had already signed up for another marathon in Disney, just two months later, so I spent November and December doing what I could. That’s not a lot of time when you’ve back slid for a year almost, back to where you were before you even startedalmost. I got to Disney and it was predicted to be unseasonably hot. After baking for over 6 hours two months prior, I went and bought a visor to wear for this one, my forehead just couldn’t take the sun for as long as I knew it would have to. And I went out there and suffered again.

It was somewhere around mile 16 or so, that I said the runner’s equivalent of the drunkard’s prayer. The sun was high in the sky, I had just run a long stretch of almost 3 miles staring nearly straight into it. I had just grabbed two sponges floating in a kiddie pool that Disney had on the course, I don’t know if they usually do that, but if I hadn’t just had something at a water stop, I’d have probably drank that nasty pool water that thousands of other runners had stuck their 16+ miles of sweaty hand into and grabbed a sponge before me.

Marc! If you get through this race healthy, without a heat stroke, I promise I will never put you through another race like this again. If you can’t show up to a race in shape, you don’t deserve to run it. You’ll either put in the training miles or you deserve to just lose the entry fee.

I suffered through the remaining 10 miles and got back to my room for a shower. I hurt, I was still overheated from baking in the Florida sun for 6 hours, even though I was 30 minutes faster than I had been just 2 months prior. But there was a spark.

After a week or so of recovery I started looking at races I wanted to do, there were several throughout the year, but the one I circled on the calendar, in ink, was Rock n Roll Savannah. I sat down and started planning backwards from that date, what my training would be, what races I might be able to do along the way to use as a training aid. I plotted out every run for the next 10 months, just like I had 2 years prior. I knew I was in better shape than back then, maybe not a lot better, but I had a much better base to work with. So I signed up for Rock n Roll 2013 and made the decision to set a PR (Personal Record,) and an ultimate goal of beating 4 hours. I don’t care if it’s by 1 second or 10 minutes, as long as the first digit is a 3.

I ran a half marathon 2 months later, then set my sites on a 50k in late June, my first ultra-marathon. It went much better than expected, plus got a lot of training miles in my legs and built my cardio system back. After a few weeks rest and easy runs, I started my marathon program in July. It’s still hot in Savannah, there’s a saying “hotter than Georgia asphalt” for a reason, so the runs started slow, I began to think I couldn’t get fast enough in 4 months to beat my goal. Then I did a 5k in late July on a cross country course with lots of turns and small hills, and pulled something in my leg, so I ended up losing some time while recovering in August. I got back to training as soon as I could though.

In October I did a 10 mile race in Disney, I had done this one the year before right before the first terrible marathon. It’s a night race, but it had been so humid the year before it was almost unbearable. I was curious how I’d do since I was at least attempting to train now, and I went out and crushed it, at least by my standards. I was pumped the whole time and didn’t want to slow down, right from the get go. I had to pee at mile 3 but didn’t want to waste time standing in a porta-potty line. I considered letting the darkness cover all the modesty I had and just dive to the side of the road, but I really didn’t even want to slow down for that, so I held it for 7 miles. That was a good test, I was much faster than I’d ever been, even if it was only 10 miles.

Then it started cooling off in Georgia finally, the humidity eased up some too, and the training runs got faster. I’d always heard that the rule of thumb was you lost 30 seconds for every 5 degrees over 60, it seems to be about right for me. Then about 2 weeks ago I got a little pain on the top of my foot, its too close to the race to be getting hurt, so I backed off a little, then I stopped running all together a week ago. “Old” Marc would have flipped out with losing over a week of training right before a race, but I know I’m not going to get any faster in a week, especially when you’re supposed to be tapering anyway, and not pushing as hard. So I decided that a week resting and healing would do better than the tiny bit of fitness change either direction that would happen in a week plus risking injury.

So I’m sitting here chomping at the bit, I’m so excited I’m not even sure I can go to sleep tonight. The weirdest thing of all is that this is the first race where I feel like I’m going in to it with the possibility of failing, I’ve never dealt with that before. My training in the past had always prepared me mentally for my goal, but when my goal was “get to finish line,” it really isn’t much of a goal, especially the second or third time around. Even last year when I hadn’t trained at all, I knew I could find the finish, because ANYBODY can do a marathon and find the finish line. But I’d never set a real goal, a SMART goal with a specific time, less than 4 hours. I did the miles, I got faster. I have run a faster pace than I need to, 9:09, and I have run a distance farther than 26.2 miles, but I haven’t proven to myself I can run that fast for that long at the same race.

So tomorrow morning at 7:00 AM, I’ll be at the start line ready for battle. There’s nothing more I can do but eat right, stay hydrated, get what sleep I can, wake up on time and get there. When the gun goes off it all reverts back to the last 10 months. Every mile ran, every bead of sweat left on the road in July, every mile missed hurt or lazy, it will all be revealed if the plan laid out in January, and how well I stuck to it, can help me reach that goal.

If you’re on Twitter, you can follow me at @mb168. My times at certain points will get automatically tweeted, so you can see where I am and even TweetCheer me on. In the past I’ve taken lots of pics and tweeted while running, and I intend on doing some tomorrow, but I will be laser focused on this goal. I will read your encouragement, and I will be lifted by it, so I’m thanking you now in advance for any boost you can give. Wish me luck.

2 thoughts on “Have you Ever Prepared for Battle? I Am right Now”