So there’s good news and bad news. The good news is that I set a PR in my half marathon time. The bad news is, I wasn’t running a half marathon, and I bombed the second half of the full marathon. I’ve waited two days to write this so I can clear my head and rethink the day, and again, this isn’t my run blog so I’ll spare you the deep running details. 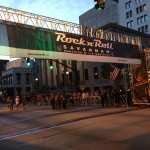 I had a plan, I’d trained for the race, I thought I could achieve something I’d never done before, breaking a time goal of less than 4 hours, I was in the zone when I lined up. I had friends around me at the start, something I’m unaccustomed to since I’m usually slower than fast, but faster than slow, I spend my runs in between in “no man’s land.” Everything was going great, I was flying, by my standards at least, I was right ahead of pace to break my goal, and felt good. Around mile 9 I caught a friend even, but we got separated at the next water stop. Then I got a knot in my stomach. Not an “OMG I need a porta-potty or a bush to dive behind cramp, just like my guts squeezed up tight for a few minutes. It backed off and I kept going another mile, and it happened again, then went away. I’d had to pee for a few miles but thought I’d wait until mile 11 when the half marathon people turned one way and full went another, because most were doing the half, so the porta-potties would have little to no lines. I hit the first one, in and out quick, but when I turned the corner back onto the course, I just didn’t feel good at all.

I got back up to speed, a little concerned of what was going on, but kept going. I checked my watch and I wasn’t as fast as I’d been before. Still ok, but I was slightly behind pace so losing a few seconds of the 3+ minutes I’d built up. Then I got a little light headed. I never felt like I was going to collapse, though I’ve never done that before so I’m guessing, but I considered stopping at a first aid station I was approaching, but it went away before I got there. It did that one more time a few minutes later, then fortunately not again.

The worst thing of all, I couldn’t eat. For you non-runners or short distance runners, we have to eat on the run. I’m not even sure how to explain this to a non runner, not even sure I understand it myself, but I just could not eat. I even had trouble drinking water, it just hit my stomach and I could feel it crash land, not good. I hadn’t eaten in a while, I was still only around mile 18-19, so a good ways to go, over an hour if I was back at the speed I’d been running earlier, which was long gone.

I’d been getting encouragement from some friends and my wife, but then it hit me that I needed real help. I pulled out my phone and started texting a runner friend that wasn’t at this race. He basically talked me through the last 6 miles, by text. Trying to get some calories in me. I even had put the phone away and tried to run a bit and heard it bling, but wanted to stay focused on running. Then my right hamstring started getting tight so I stopped to stretch it and pull out the phone and dang if he hadn’t texted to say “walk backwards out of the aid stations to keep your legs from cramping up,” like he knew it was about to happen before it did. He tried to keep me focused on moving forward and not worry about what happened or what my time was going to be. Looking back I see now he was telling me to “fly the damn plane.” Thanks a ton Tim.

Some quick mental calculations showed me that I’d let my early gains disappear, my sub 4 hour goal slipped through my fingers like sand. At this point my day turned from beating a goal, to survival. I just wanted to get to the end now without a DNF. The word quit briefly entered my mind somewhere in the 20’s range, but I was able to squash it, about the best mental game I could conjure once it started going downhill. Finishing by just surviving sucks.

So what’s my take away? I did run my fastest half marathon, by nearly 10 minutes, I’d sort of like to do another half soon and see how well I can do with that as my focus. I also learned that I could hold a faster pace for over 2 hours, the cooler, drier air did help. It also wasn’t my slowest, or even my second slowest marathon, last year has that honor, by an extra TWO HOURS over this time, so even though it was a fail to me, anyone else looking at my results and not reading this would just say “great job!” I learned that I’m human and “stuff happens,” but that I could overcome failure, even while it was still happening, and get to the finish line without quitting. I never even stopped moving, though there were a few times I just wanted to sit on the curb holding my head in my hands. You can see here where my times started going downhill, though the extra minute at mile 10 was my pee break. I also thought I had walked a LOT more than what these times show on the left, a good powerwalk is in the 16-17 min range, so it really wasn’t as bad as I thought it was while it was happening. Isn’t that always the case? Was my goal too lofty? I don’t think so, I was right where I wanted to be, in my target heart zone the whole time, I didn’t burn out too soon. Something just affected me in a bad way. I’m still not sure what it was, maybe I ate something bad the night before or maybe I was slightly sick from something else and the exertion brought it out, I can’t even speculate right now but its never happened before, and hopefully never will again.

Most importantly, the goal is still there for the next race, because I’m not quitting. The next race will be different. Different place with different food, different times, different course, but hopefully back to the “normal” healthy me.

Have you ever failed at something you knew you could do? What did you do to fix it, or are you still trying to get back on that horse and make it happen? Let me know in the comments below, maybe we can help each other.

4 thoughts on “Finding Success in Failure”